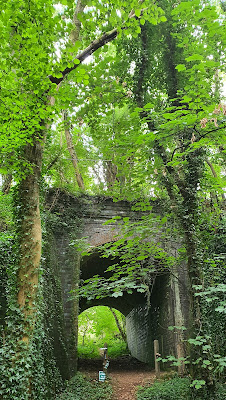 After leaving Bristol, we drove into the Cotswolds, a 2000 km² area in south-central England. The area is famous for it's rolling hills, the "wolds" and its honey-hued stone houses (made out of yellow lime stones) surrounded by sheep enclosures. So it pretty much is a hilly area with lots of sheep around it. My human spent a couple of days walking around those villages and hills, enjoying the peace and quiet of nature, getting sprinkled on by the odd shower.                                          Read the sign! We visited Cirencester, with a population of 20.000, the largest town in the Cotswolds. It used to be known as Corinium and was, in the 3rd Century, the second largest town in what was then the Roman Empire, after Londinium, of course. The English love their superlatives. This is the tallest yew hedge in the country with 12,2m Obelisks represent petrified rays of the sun, symbols for power and immortality Adjacent to the parking lot was a small theater. Just out
Post a Comment
Read more
More posts